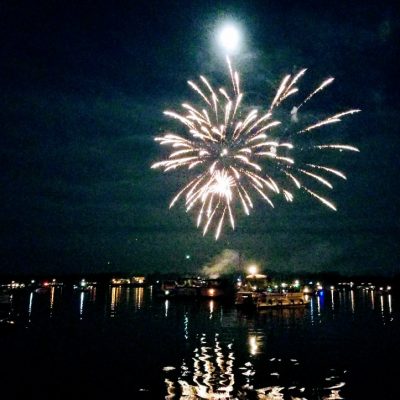 This past 4th of July, while I was watching the fireworks from the water with some good friends and family, I was suddenly hit with the true meaning of the holiday and what the original events ultimately set in motion. It’s funny how you can go through an entire holiday like Independence Day, or President’s Day, or Memorial Day, and forget what it’s really all about. While food is cooking on the grill and the kids are playing in the yard it’s easy to lose yourself in the celebration while never really acknowledging the events that led to the holiday itself.

We were watching the fireworks from a boat that was anchored up in a harbor, surrounded by lots of other people on other boats of every size and shape imaginable. There were large motor yachts with back decks big enough to comfortably hold 20 people and little bass boats with two people sitting on the bow. Everyone was having a great time, laughing and singing, and honking their horns in approval whenever the bigger bangs went off.

As the fireworks show was obviously getting close to the end a guy in a smaller boat took some speakers and set them on his roof. He then stood at attention with his hand over his heart as the Star Spangled Banner blared out of his stereo and out across the harbor. At first it was hard to hear, but he was also singing along with the National Anthem.

One by one, starting with the boats closest to him, people began to turn off their own stereos and then, they either quieted down or started to sing along with him. Before long, the people onboard many of the boats in the harbor were standing with their hands over the hearts, or sitting and singing, or just watching quietly as the music played and the fireworks thundered over our heads.

It was the kind of thing that gives you goosebumps. All I could think about was the incredible gift we’ve been given by the men and women who stood up for freedom and faced down those who wanted to take it from them. They faced the dangers, risked their lives, and pushed through unimaginable hardships to guarantee that their children, and their children’s children, would have the rights and freedoms we know today.

All I could think about was the incredible gift we’ve been given by the men and women who stood up for their freedom and faced down the people who wanted to take it from them. They accepted the danger, risked or lost their lives, and pushed through unimaginable hardships to guarantee that their children, and their children’s children, would have the rights and freedoms we know today.

We have the freedom to get in a boat and go watch the fireworks with our families, or rent a camper and cross any of 50 state lines to go where we want, when we want. We can pack up our kids and drive across the country to see the places where history unfolded – places like Gettysburg, or Atlanta, or Williamsburg, or Washington D.C, where we can see the foundations of freedom any time we choose.

Camper rental means freedom. It’s the perfect example of the independence we celebrate every July. Pick a destination anywhere in the United States and you can just go. Michigan Camper Rental will help you get there.